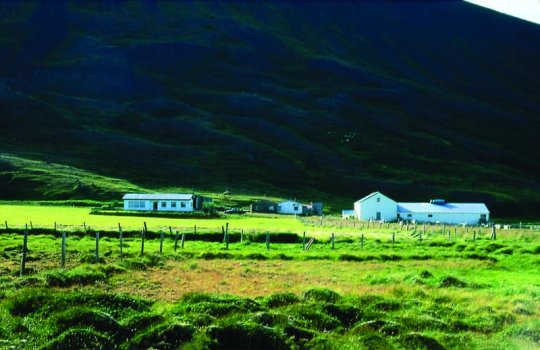 The farmers at HAGALAND participate in the following national initiatives:

In 1942, Einar Kristjánsson and his wife Guðrún Kristjánsdóttir built a new farm, HAGALAND (Pasture Land), situated north of the hayfields of the farm HERMUNDARFELL (Hermundur´s Mountain). The new farm received half of the tracts of undivided land belonging to HERMUNDARFELL. The land belonging to the two farms stretches towards river TUNGUÁ (Spit River), south to the mountain pass of EINARSSKARÐ (Einar´s Pass), around the mountain of HERMUNDARFELL (Hermundur´s Mountain) and from there along the vally of HÖGNADALUR (Högni´s Valley) to the banks of river FRAKKAGILSÁ (Frenchman´s Pass River). South-west of the mountain is a deserted farm, HERMUNDARFELLSSEL (Hermundur´s Mountain Shack) which also belongs to the farms. The buildings at the two farms are situated on a level piece of land close to the mountain. The fertile and grass grown marshlands out and south of the original hayfields have now been dewatered and cultivation into hayfields has started. A fairly good pasture is situated in the mountainside that provides good shelter, especially south of the farm. The slopes of the hillsides are generous with berries and the view is panoramic. A few hillocks called BÚÐAHÓLAR (Camp Hillocks) are found in a short distance south of river FRAKKAGILSÁ (Frenchman´s Pass River) north of HAGALAND. South of the hillocks some ancient ruins, approximately 3 x 6-10 meters wide, are found. Freshwater of high quality and good pastures for horse grazing are found in close vicinity, indicating that members of the parliament and general travellers may have camped here on their way through the area. This is supported by the place name of LÖGRÉTTUNES (Law Rights Peninsula) which is situated approximately one kilometer away. 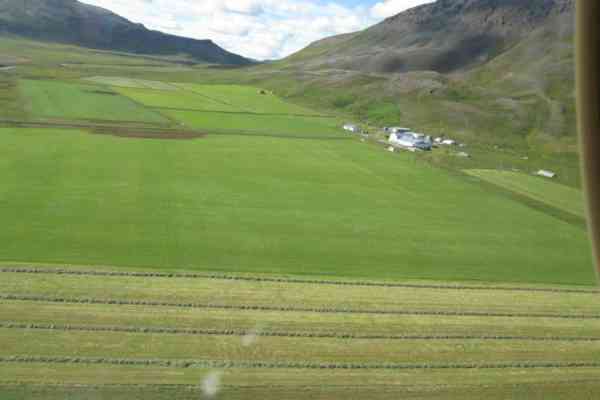